Plutus is the native smart contract language for Cardano. It is a Turing-complete language written in Haskell, and Plutus smart contracts are effectively Haskell programs. By using Plutus, you can be confident in the correct execution of your smart contracts. It draws from modern language research to provide a safe, full-stack programming environment based on Haskell, the leading purely-functional programming language.

The Alonzo upgrade brings exciting and highly anticipated capabilities to Cardano through the integration of Plutus scripts onto the blockchain. These scripts now enable the implementation of smart contracts on Cardano, enabling a host of new use cases for decentralized applications (DApps) for the very first time.

If you want to get started, visit the Plutus Playground to learn how to write Plutus programs and use the tutorials and to assist you. You should also read the explainers and tutorials provided here and refer to the Plutus explanations to learn more about the Plutus language itself.

We are here to help! If you need support while using Plutus, please log an issue in the Plutus repository and include as much detail as you can. 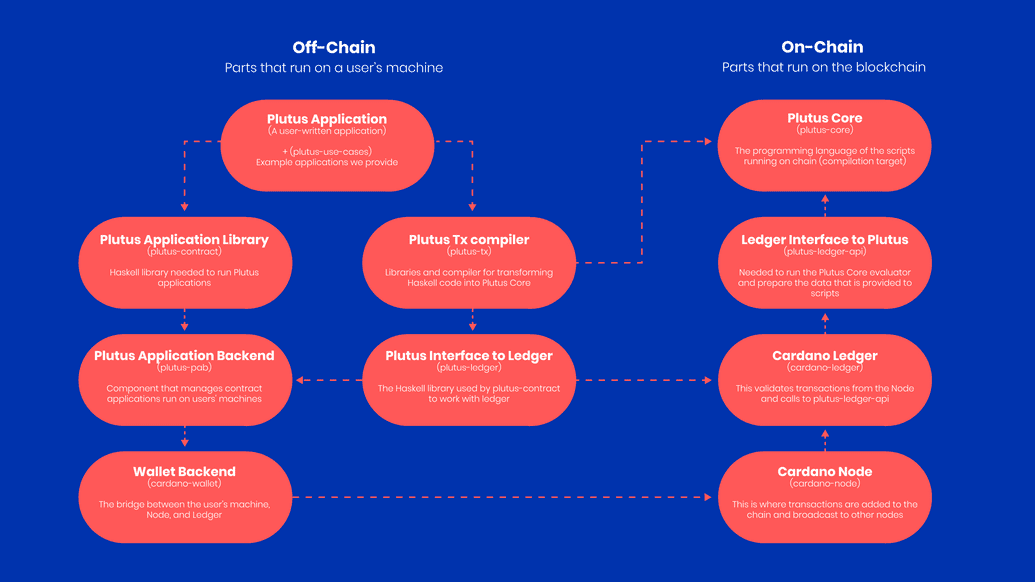 Cardano uses the extended UTXO accounting model (EUTXO) which extends the unspent (U) transaction (TX) output (O) accounting model (UTXO) model (used by Bitcoin). In the UTXO model, a transaction has inputs and outputs, where the inputs are unspent outputs from previous transactions. As soon as an output is used as input in a transaction, it becomes spent and can never be used again. The output is specified by an address (a public key or public key hash) and a value (consisting of an ada amount and optional, additional native token amounts).

Plutus Core is the scripting language used by Cardano to implement the EUTXO model. It is a simple, functional language similar to Haskell, and a large subset of Haskell can be used to write Plutus Core scripts. As a smart contract author, you don’t write any Plutus Core; rather, all Plutus Core scripts are generated by a Haskell compiler plugin.

These scripts will be executed by nodes during transaction validation ‘live’ on the chain. They will either lock EUTXOs in the form of validator scripts or as minting policies, which control the minting and burning of native tokens.

In practice, when developing smart contracts, you will write validator scripts in Haskell, which will then be automatically compiled into Plutus Core using a GHC plug-in called Plutus Tx.

The PAF provides easy access to services that are commonly used by Plutus applications. Applications deployed using the framework’s libraries can be run on the Plutus application backend, which provides runtime support for access to the blockchain and other concerns such as persistence, logging, and monitoring. Applications written on top of the PAF automatically provide an HTTP and WebSocket interface that can interact with the application from the web browser.

The on-chain state of validator scripts can only be modified by transactions that spend and produce script output. When writing a Plutus application, we need to consider not only the on-chain part of the application (the Plutus Core scripts) but also the off-chain part that builds and submits transactions.

The PAB is currently being developed and will execute the off-chain component of Plutus applications. It will manage application requests to the wallet backend and node, store the application state, and offer an HTTP API for managing application instances.

Each native token comes with its own minting policy, which determines the conditions under which tokens can be minted and burnt. With the deployment of Plutus, users will be able to write minting policies in Haskell and compile them to Plutus Core. During the minting or burning process, the Plutus Core policy script will be executed in the context of the minting or burning transaction, and the script will have to approve or forbid the action. This feature will further accelerate the growth of Non Fungible Tokens (NFTs) on Cardano by enabling the creation of much more complex minting policies and allowing the creation of NFTs in a trustless manner.

Plutus provides considerable security advantages. It delivers an easier, more robust way to show that your smart contracts are correct and will not encounter the problems found in previous smart contract language design.

Plutus enables a novel integrated approach to smart contract and distributed application development that is more convenient and safer than previous alternatives. Both the on-chain and off-chain code are based on the same language. You use a uniform code base, which the Plutus toolchain then automatically separates into on-chain and off-chain code and packages for deployment.

Additionally, in contrast to Ethereum, Plutus supports user-defined tokens (both fungible and non-fungible natively which requires much less code.

Previous
Contribute to Rosetta
Next
Understanding the Extended UTXO model